Tenerife is the largest and most popular of the group of islands known as the Canary Islands, located in the Atlantic Ocean opposite the northwest coast of Africa. Thanks to its subtropical climate and proximity to the African coast, Tenerife’s weather is almost perfect and the sun shines all year round, making it an attractive destination in Europe.

Which is better: Tenerife North or South?

Although most visitors to Tenerife flock to the south, where it is undoubtedly warmest and driest, the scenery is much richer and more beautiful in the north.

The north of Tenerife is the perfect place to experience the Canarian way of life, enjoy a variety of leisure activities such as hiking, surfing and exploring unspoilt beaches, or simply admire the beautiful volcanic landscape.

Is it cooler in the north of Tenerife than in the south?

Compared to the south, the north of Tenerife is a few degrees cooler, it can sometimes rain more than in the south, but never comparable to northern Europe. As a rule, you have nice, sunny weather throughout.

The best thing about Tenerife is that the distance between north and south is not great. So if it’s rainy and gloomy in the north, you’re never too far from the sunnier south.

What to do in the north of Tenerife?

The north of Tenerife is very different from the south, more authentic, full of small villages where the inhabitants live away from the hustle and bustle of the big tourist areas.

Here you can find real local food served in typical restaurants, local wine that you can taste in the vineyard where it was produced, green landscapes and great hiking trails.

The north of Tenerife is ideal for those who want an active holiday in Tenerife.

Holiday home by the sea Tenerife 1

Beautiful holiday home for rent in the small fishing village of El Caleton by the sea with stunning panoramic views.

Holiday home by the sea Tenerife 1

The holiday home (72 m²) directly by the sea has a living room with a nice sitting area, very fast internet (fibre optic connection), flat screen TV with international channels and a desk. Besides a bedroom and bathroom, there is also a terrace, garden with outdoor shower and separate toilet. All with a breathtaking all-round sea view and the sound of the waves in the background. Ideal for relaxing or working in peace and quiet. The open kitchen is equipped with electric cooker, coffee maker, kettle, microwave, dishwasher and other kitchen utensils. Right next to the kitchen is a dining table with chairs and in an alcove is the washing machine.

Holiday home by the sea Tenerife 2

The fishing village of El Caleton has a local café in the bay and the authentic restaurant Casa Miguel, built on the rocks. It is important to note that the ability to swim in the bay depends on the weather and the tides.  The sea in the north of Tenerife is much wilder than in the south and swimming is often not possible in winter.

The sea and waves offer a spectacular spectacle and the most safe place to swim is in the natural pools in the rocks. The climate by the sea is mild all year round and pleasant even in winter. Nevertheless, it can be chilly at times and we recommend that guests bring warmer clothing during the winter season.

The holiday home in El Caleton is a very special place in the middle of nature, directly by the sea and offers the ultimate opportunity to relax and work. 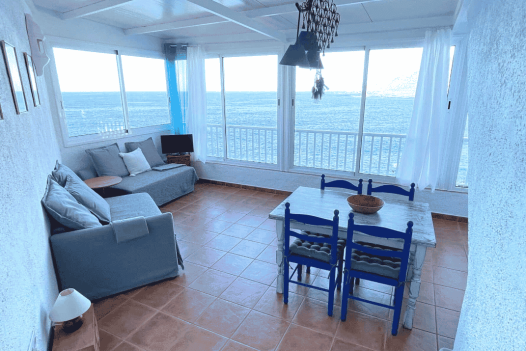 Holiday home by the sea Tenerife 2

Beautiful holiday home for rent in the small fishing village of El Caleton by the sea with stunning panoramic views. 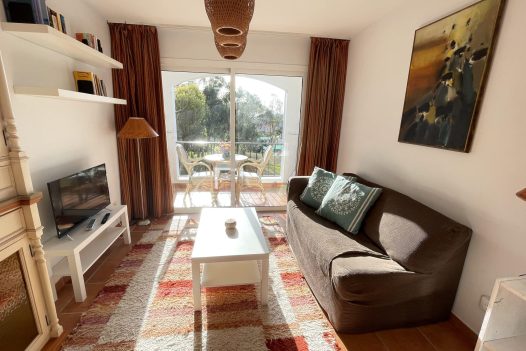 The appartment (40m²) has a living room with adjoining kitchen and balcony. Very fast internet (fibre optic connection) and a flat screen TV with international channels are available.
The open kitchen is equipped with an electric cooker, coffee machine, kettle, microwave, dishwasher and other kitchen utensils. A seating area is integrated in the kitchen.
The balcony has a table and chairs so you can also sit and eat outside with a view of the greenery.
The beautiful bedroom has a 180 x 200 cm bed and wardrobe with enough storage space. Between the bedroom and the bathroom there is a room that can be used as a small office with desk and wardrobe.
The bathroom has a toilet, sink and bathtub.

The holiday apartment Tenerife North No. 2 (60 m²) has a living room with working/reading corner with French balcony with large deep floor windows that can be opened completely. There is a beautiful view in the green. Very fast internet (fibre optic connection) and a flat screen TV with international channels are available. Next to the living room there is a nice kitchen with dining table corner. The open kitchen is equipped with electric cooker, oven, coffee maker, kettle, microwave, dishwasher and other kitchen utensils.
There are two bedrooms. One bedroom has a 180×190 cm bed and enough wardrobes with storage space and an en-suite bathroom with shower, toilet and sink.

The second bedroom has a 130×190 cm bed and a desk and can be used as a separate office or bedroom. 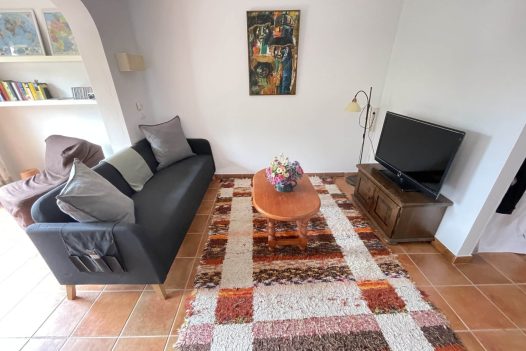